This is the first 30-minute video in an ongoing series of free on-demand professional learning videos from Pivot Learning* that will feature expert advice about supporting students with word reading difficulties.

School closures due to COVID-19 this spring highlighted the importance of maintaining high quality-instruction for students with word reading difficulties. As districts determine how to provide instruction this school year, former Dyslexia Specialist for the Oregon Department of Education and CORE’s Director of Literacy, Dr. Carrie Thomas Beck, shares three must-have features of effective instruction for students with word reading difficulties, including students with dyslexia, that can be used in both in-person and remote lessons.

Complete the form below to watch the video.

*Pivot Learning refers to both Pivot Learning and our subsidiary, the Consortium on Reaching Excellence in Education (CORE). Learn more about CORE at corelearn.com. 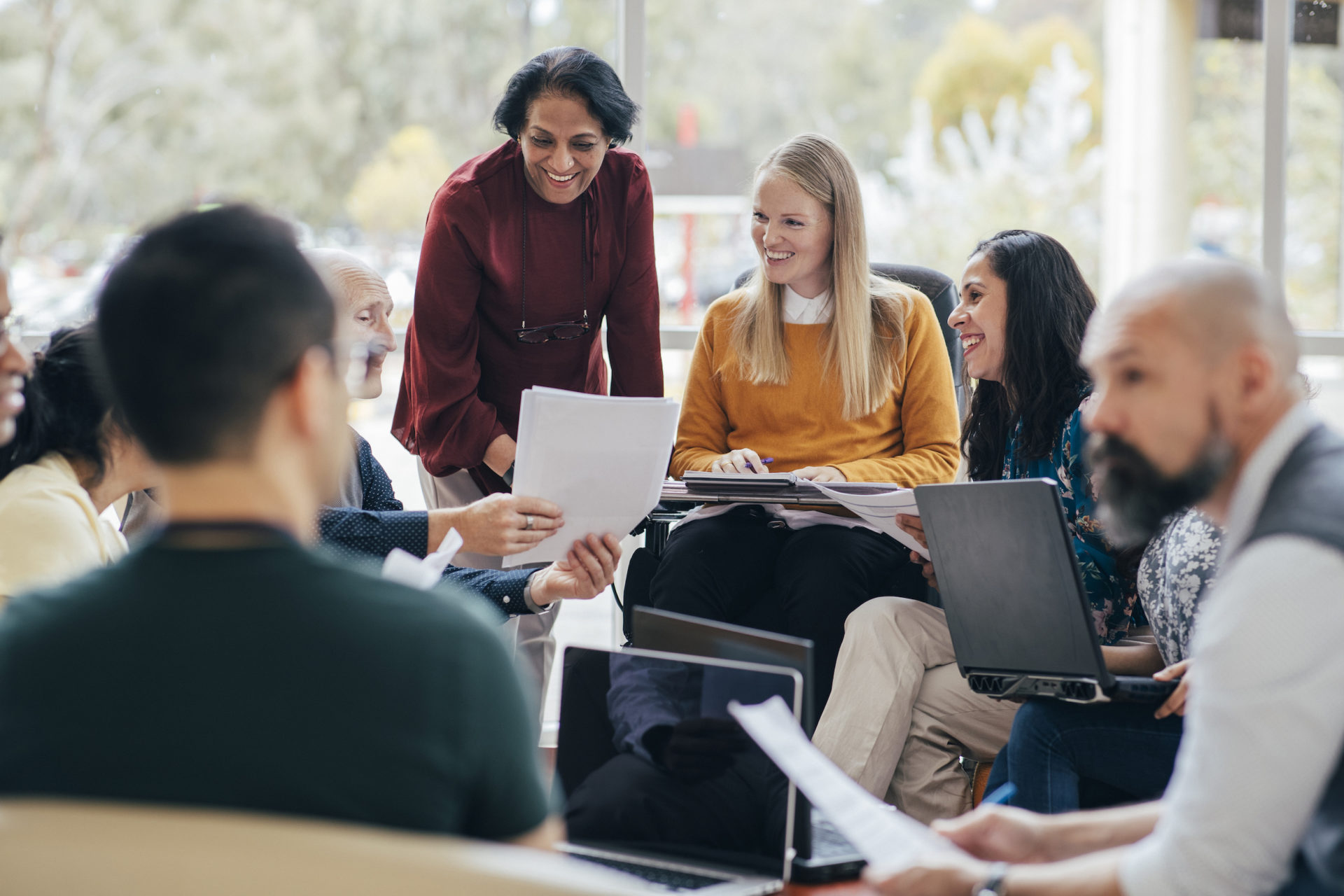 Addressing equity challenges has been the consistent thread that runs through major California education policies of the last decade. However, educational inequities, already significant prior to COVID-19, have been exacerbated by the pandemic’s education disruptions. How can we make Multi-Tiered System of Supports (MTSS) — a framework for all students focused on maximizing achievement and success in school by integrating evidence-based instruction with ongoing assessment — more accessible to school districts as they strive to equitably support all students?

This new report from the Policy Analysis for California Education (PACE) examines a project led by Pivot Learning from 2018 to 2020 that involved the Sanger, Monterey Peninsula, and Lancaster school districts. Sanger has coherently and cohesively implemented MTSS in a way that adapts the framework to the district’s culture. The Pivot-led project sought to determine if direct support from Sanger could inform MTSS implementation in other school districts.

Findings from PACE’s research of the project found that leaders at Monterey Peninsula and Lancaster did report benefits from Sanger’s expertise and Pivot Learning’s guidance and technical assistance. Download the report to learn more about the results of the pilot and potential ways this peer-to-peer model could be used to further California’s efforts to broaden MTSS implementation as a lever for equity. 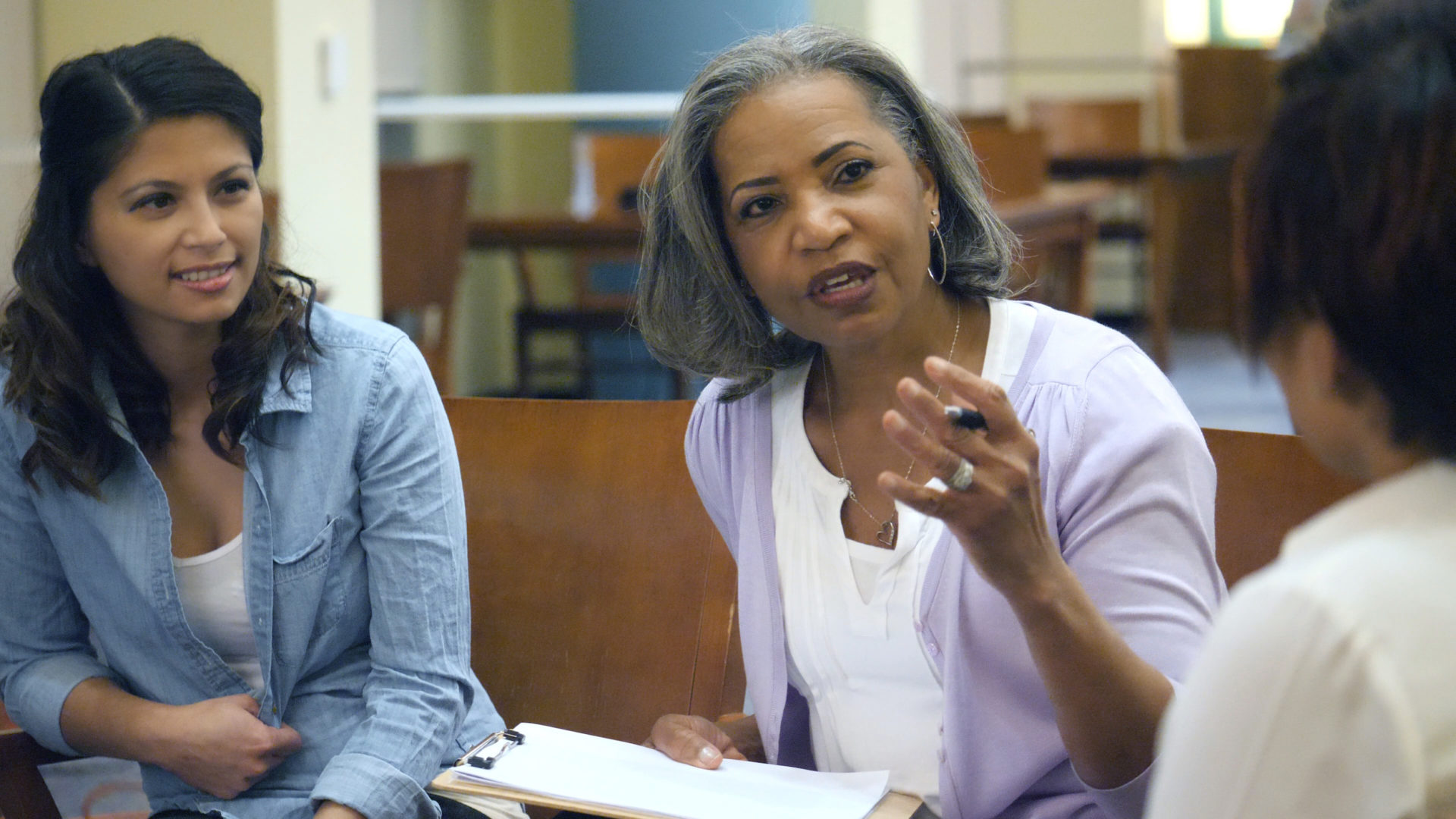 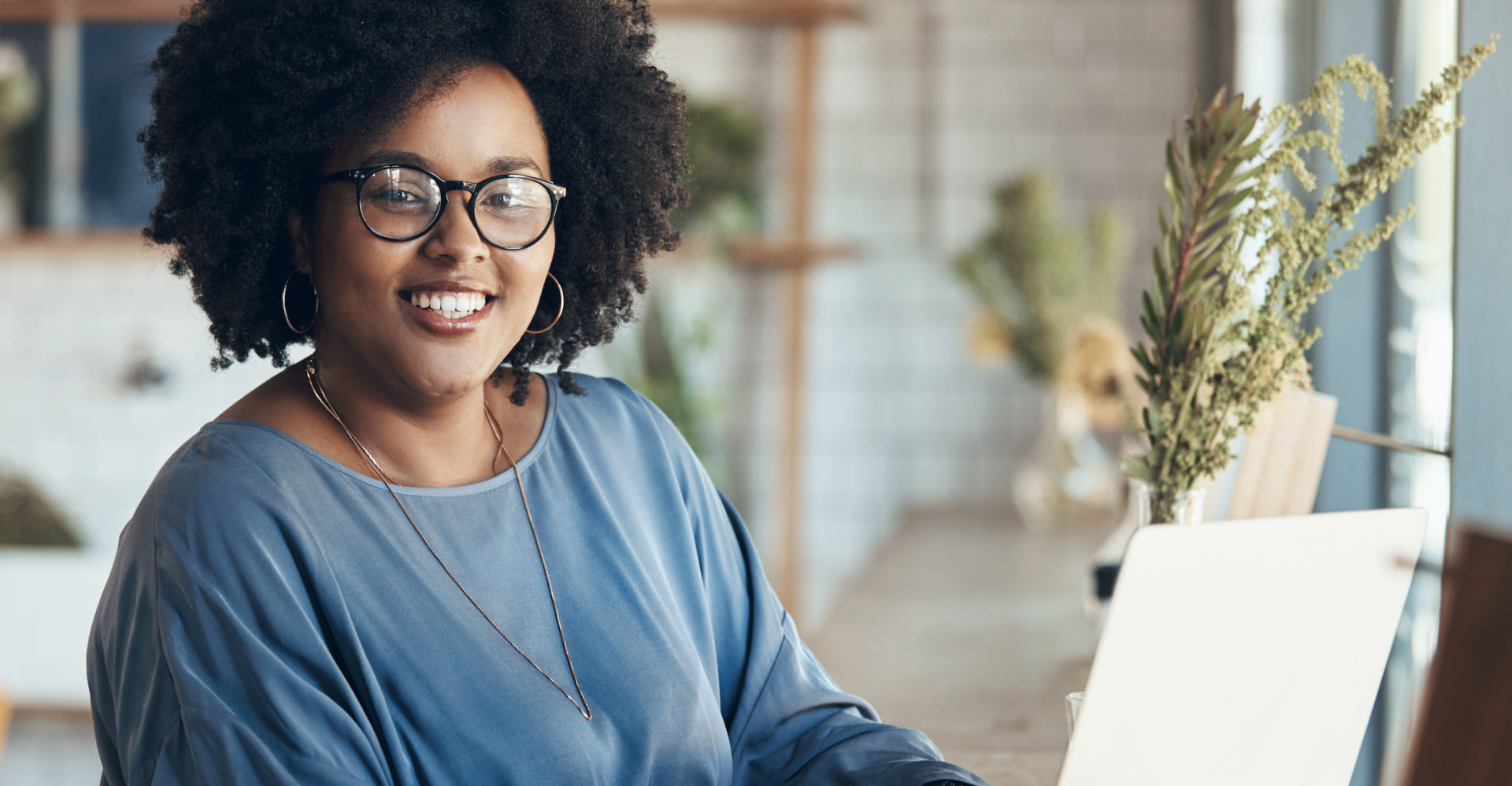 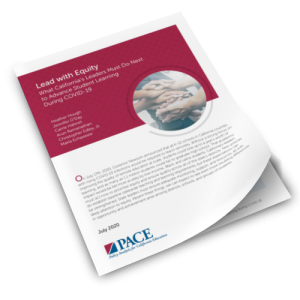 When California’s schools reopen for the 2020–21 school year, they will look dramatically different than before the pandemic. Whether in person, online, or some combination of the two, it will be critical that each student receives rigorous instruction and the academic, social, and emotional support needed to thrive. Without a strong focus on improving the quality of remote education at scale, students could lose up to a year’s worth of learning, and as many as 1.1 million students could fail to graduate high school.

A new brief, Lead with Equity: What California’s Leaders Must Do Next to Advance Student Learning During COVID-19, published by Policy Analysis for California Education and whose authors include Dr. Arun Ramanathan, CEO, Pivot Learning, provides recommendations to policymakers on the appropriate state role in supporting teaching and learning as the pandemic continues, calling on the state to: 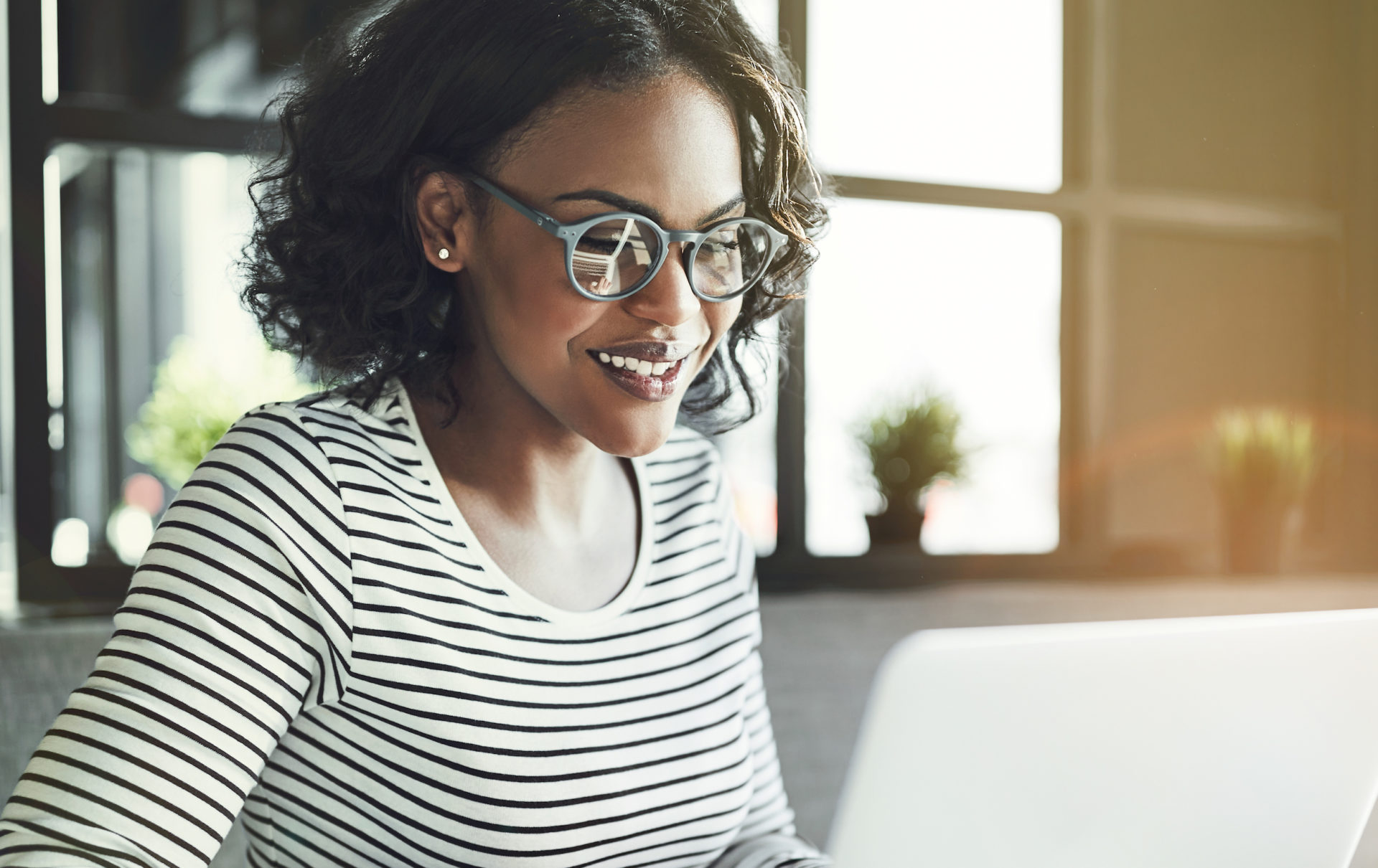 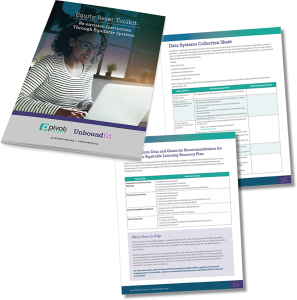 While the 2020 pandemic affected all aspects of life, arguably one of its biggest disruptions was to our public education system and the more than 50 million students in it. Our most vulnerable student populations were especially impacted by school closures and social distancing, where they were often left without access to equitable instruction.

COVID-19 certainly highlighted and deepened the inequities in access to high-quality education. But districts can take this moment to not only respond to the needs resulting from learning disruptions last spring, but re-envision how their systems support educational equity.

Download Our Free Equity Reset Toolkit
Pivot Learning* and UnboundEd have created a free Equity Reset Toolkit that provides district leadership teams resources for a nine-week data collection and analysis process focused on equitable learning recovery in K-12 ELA and math. Download this toolkit to create a data-driven equitable education recovery plan for restructuring or building systems to support equitable ELA and math instruction that can be adapted for in-person, remote, or blended learning.

You are downloading a zip file that contains 7 PDFs. The first PDF in the file is the full toolkit. We have also provided each of the surveys included in the full toolkit PDF as individual files.

On-Demand Webinar:
Learn How to Use the Equity Reset Toolkit

Watch this hour-long on-demand webinar to learn how to use the Equity Reset Toolkit to discover unfinished instruction needs as a result of school closures and how to develop a plan to address these needs equitably.

We're Here to Support Your Work Toward Equitable Learning Recovery

As part of our services, we will:

Because this work is so critical to learning recovery, the cost of these services can be covered by CARES Act learning loss funding. Learn more about partnering with Pivot and UnboundEd in this flyer.

Fill out the form below to talk with one of our instructional experts about working with us to implement our Equity Reset Toolkit in your district.

*Pivot Learning refers to both Pivot Learning and our subsidiary, the Consortium on Reaching Excellence in Education (CORE). Learn more about CORE at corelearn.com. 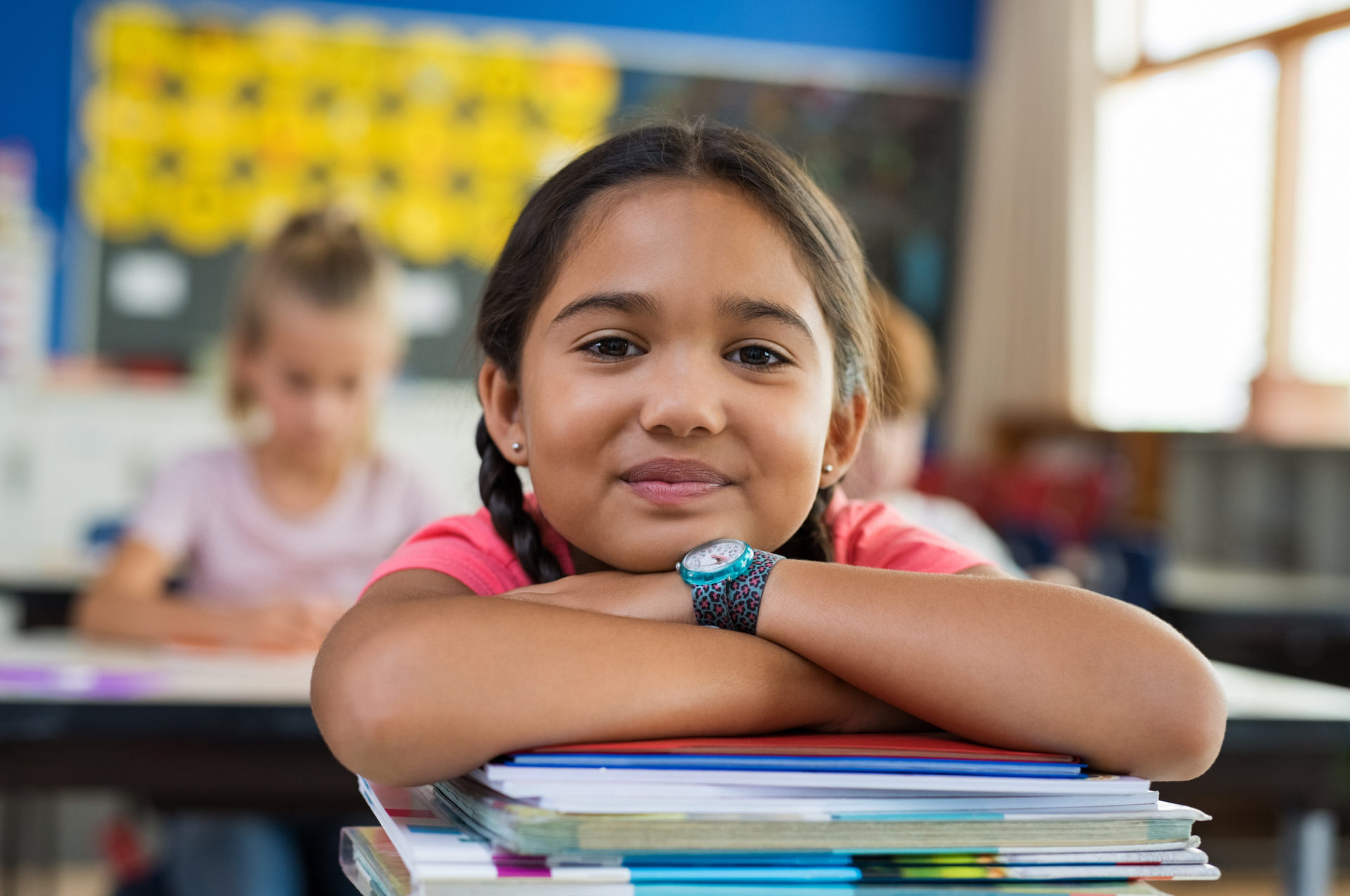 Published by our partners at Policy Analysis for California Education (PACE)

In preparing for the next school year, California state policymakers must set clear statewide expectations for teaching, learning, and student support, regardless of whether instruction is online or in person. This spring, local school districts scrambled to adapt to COVID-19 with a wide range of responses largely focused on securing delivery of online resources. Now is the time to shift the conversation back to the core purpose of school: learning. The state should establish a minimum amount of instructional time; create an instrument of diagnostic assessment and require its use; adopt instructional continuity plans; and advocate for and secure additional funding. 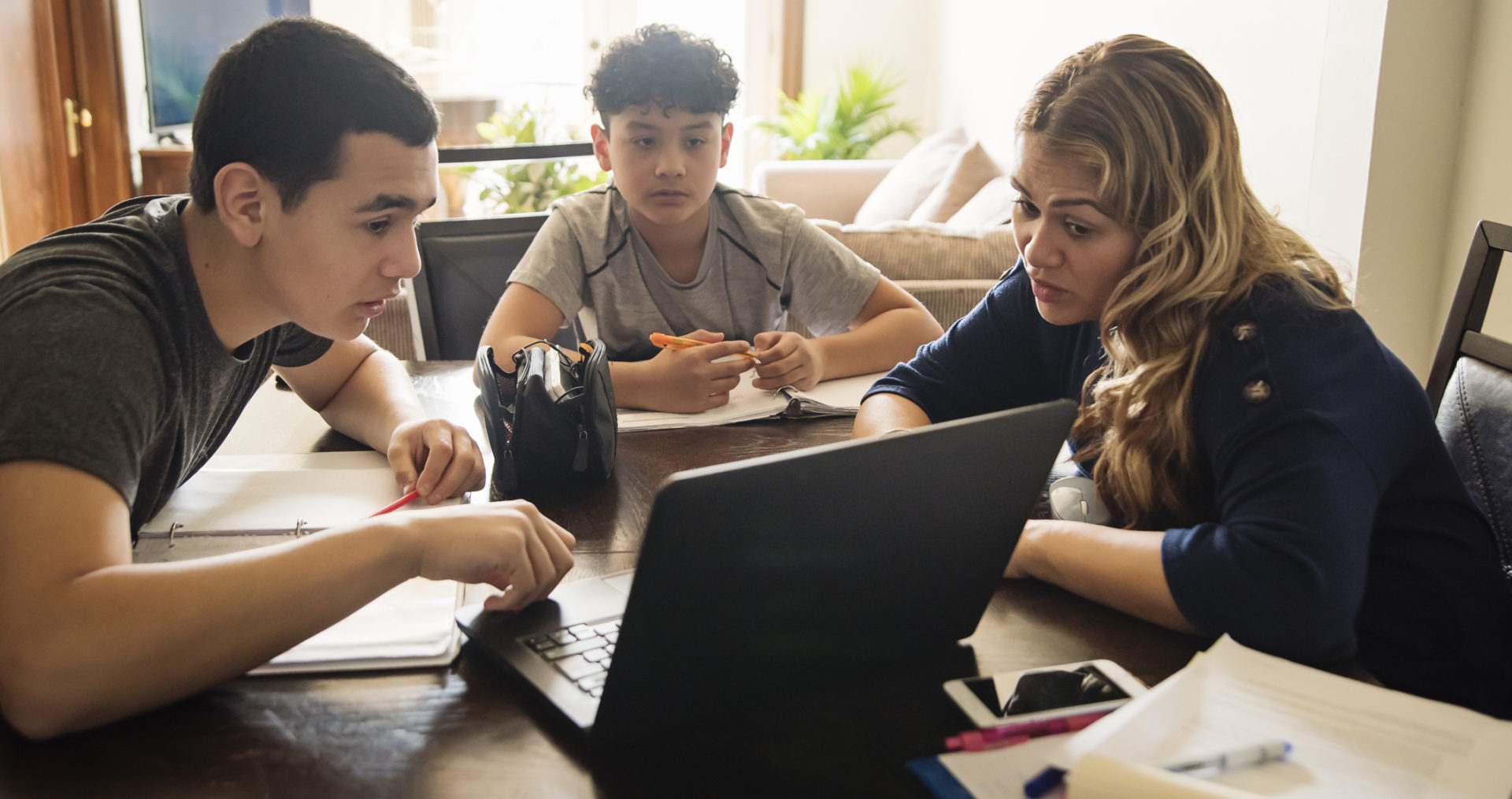 Districts across California have stepped up, shifting their practices to serve students even as shelter-in-place policies have shut down brick-and-mortar schools. Many districts have come up with innovative ways to ensure all students continue to receive the supports they need. The most successful have designed their crisis response around their most vulnerable students.

This COVID-19 Crisis Response series from Pivot Learning and Policy Analysis for California Education (PACE) profiles districts across the state who have implemented policies and practices centered around equity to ensure that the needs of every student, especially the most vulnerable, are met during the pandemic. Read each report to review response strategies that have shown promising results to help you plan and refine your own strategies to better serve students. We also invite you to watch our on-demand webinar to hear how two districts, Pajaro Valley Unified and Mother Lode Union, initially addressed students’ immediate needs following school closures and how they are approaching strategic planning for the months ahead. 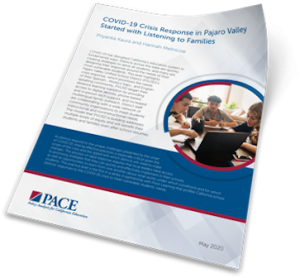 This report explains how PVUSD created a crisis response that prioritized the needs of its large Spanish-, Mixteco bajo- and English-speaking communities while serving every student in the district. Key takeaways include practices the district created to increase family engagement and outreach and improve instructional access for English learners. 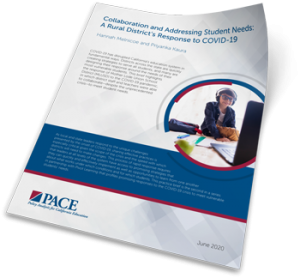 Educators in MLUSD used collaboration and targeted universalism to ensure that no child slipped through the cracks during the transition to remote learning. Learn how they have gone to great lengths to ensure every student in the rural district, especially their most vulnerable students, has access to healthy meals and resources to continue learning in the midst of this crisis.

This series of reports will profile local and state leaders with promising and equitable COVID-19 response plans. Visit this page periodically to read new reports! 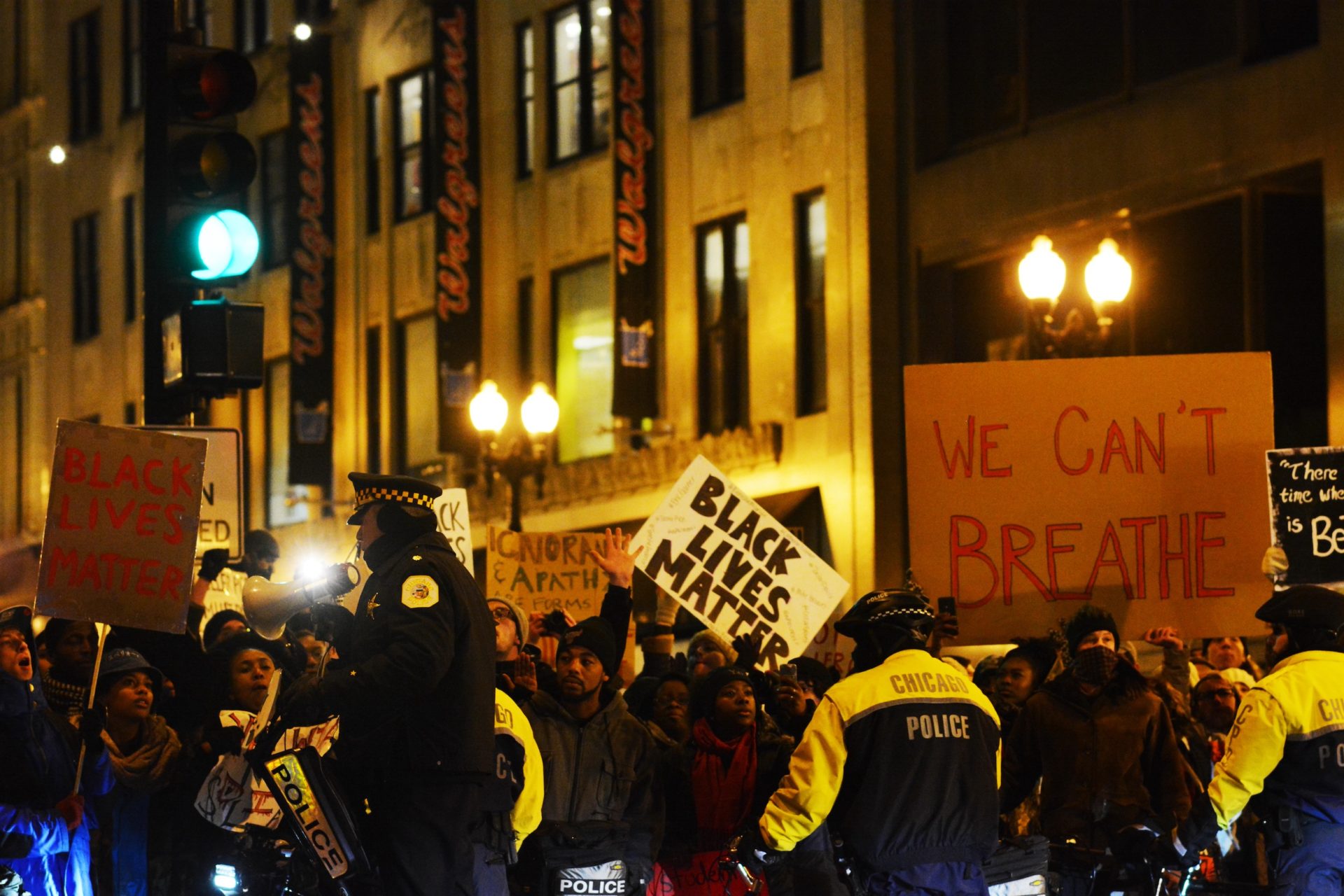 At the beginning of the week, we released a brief statement from Pivot Learning condemning the murder of Mr. George Floyd. As the week has progressed, I wanted to share some additional personal reflections.

There was no mention of white racism. Centuries of state-sanctioned violence and oppression. Or the immense privilege of the mostly white people applying labels to Black youth that vastly diminish their chances of graduating, attending college, avoiding prison and earning a living wage—essentially the rest of the lives. I began questioning who was emotionally disturbed and who wasn’t.

We don’t need another grotesque video of the killing of yet another Black man or woman by the police to answer that question. Our racist system is emotionally disturbed. Frankly, it’s disturbing that the only times that most Americans are moved to action is when the murders of Black men and women like George Floyd, Ahmaud Arbery and Breonna Taylor are caught on film and provoke mass demonstrations. Really, what good is outrage unless it changes the mundane, daily manifestations of that racist system in beliefs, policies and practices? In our schools, this racism begins with the belief that Black children are not as smart and capable as white children, and exacerbates it by instructing them that they need to conform if they ever hope to succeed.

We can protest police violence and racism against Black Americans and hope that our voices, combined with many others, produce changes in policing and the criminal justice system. And, for those of us in public education, we should also be looking deeply within ourselves, questioning our beliefs, and assessing whether our “normal” practices in teaching, staffing, funding and discipline address racism and injustice or promote it. And if they do, we must end them, no matter how long we’ve done them and how hard it is to make these changes. Until we do, we should be the ones labeled emotionally disturbed. 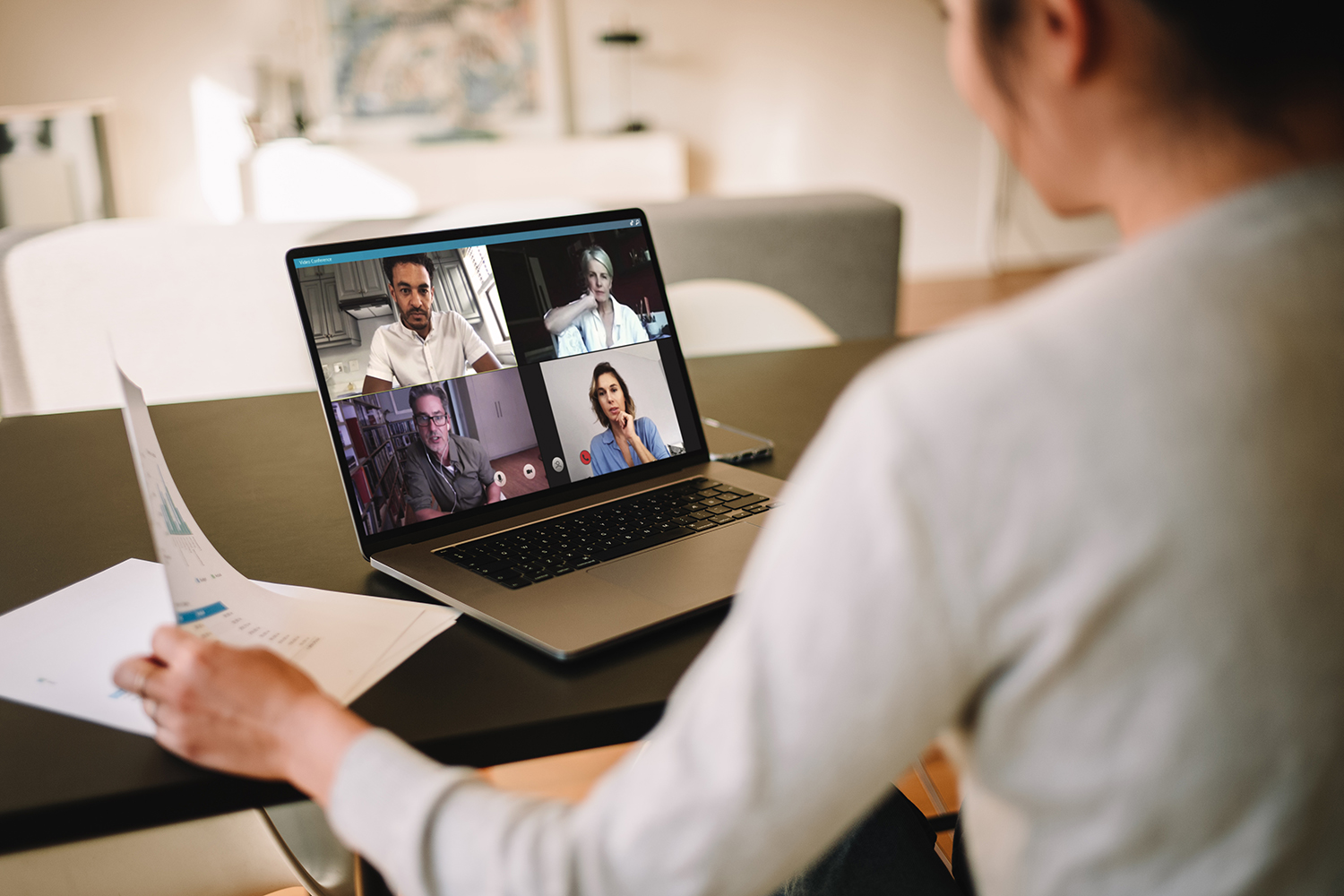 What can we learn from California school districts’ early response to COVID-19?

Find out during this on-demand webinar, presented by Pivot Learning and Policy Analysis for California Education (PACE). To aid in both local and state decision-making, Pivot Learning and PACE have been documenting promising practices at school districts in California. In this webinar, we’ll highlight how two districts, Pajaro Valley Unified and Mother Lode Union, initially addressed students’ immediate needs following school closures and how they are approaching strategic planning for the months ahead.

You will hear from:

Watch the webinar to hear a discussion about the challenges and the early problem-solving that we have seen at the local level in the early stages of COVID-19 response.

If you are unable to join the live webinar, please go ahead and register. We will email you a recording to watch at your convenience. 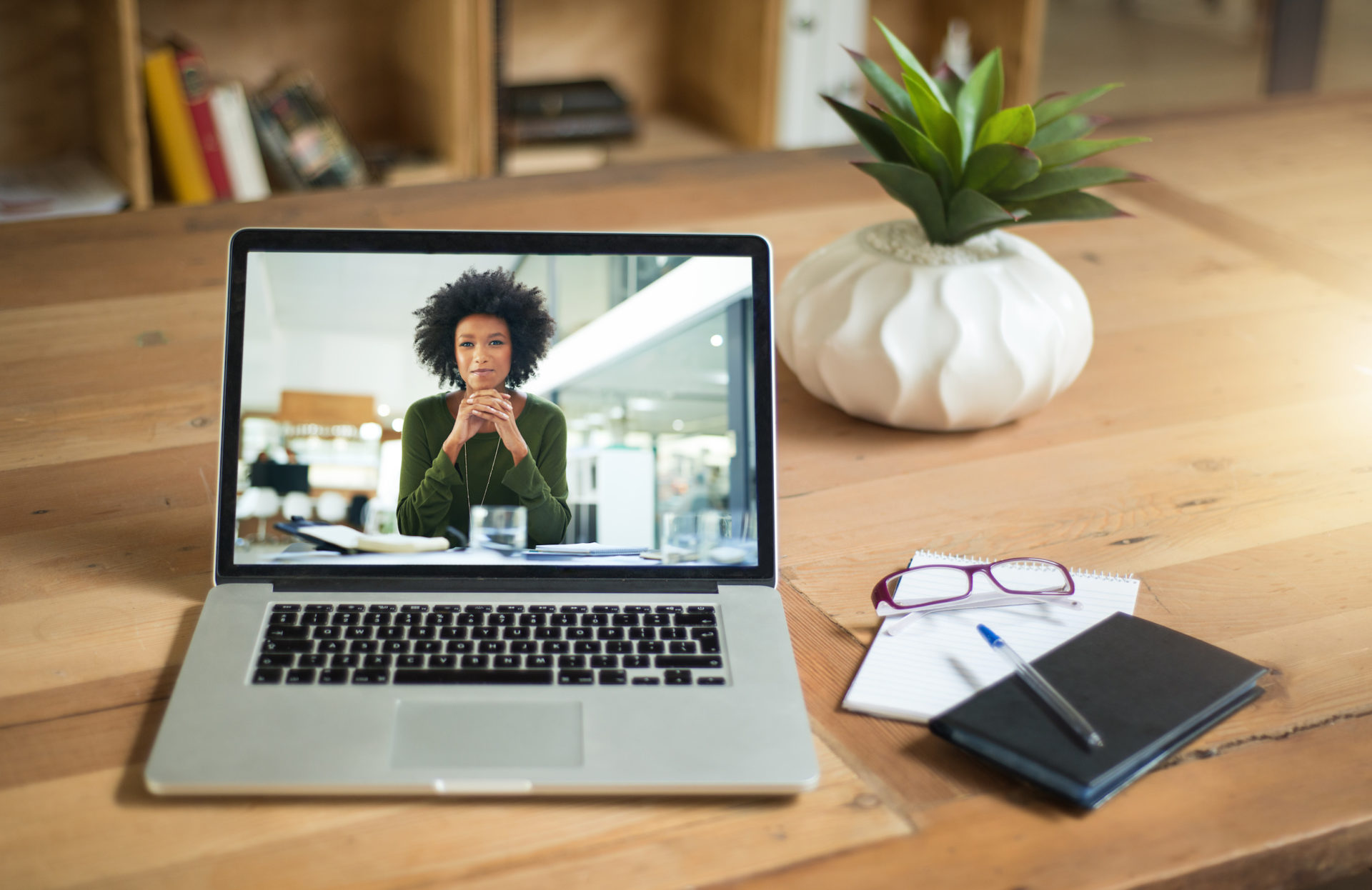 Take a look at the latest updates and information about how Pivot Learning, our subsidiary CORE, and our partners are continuing to support educators, students, and families during the COVID-19 crisis. We’re excited to share our free Equitable Learning Recovery Toolkit created in collaboration with UnboundEd, insights from experts about the initial challenges and needed district supports for English Learners, our dyslexia and word-reading difficulties online resource library, and much more.