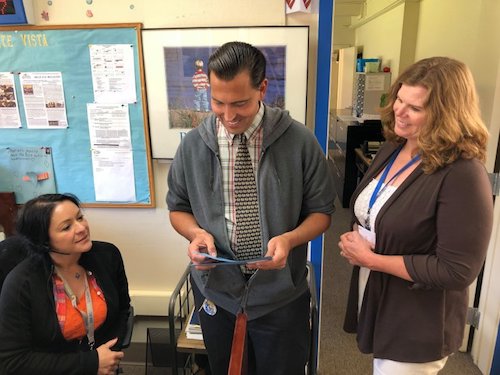 At one time when a student acted out in class, that student would often be punished for their behavior and possibly excluded from the classroom. The student would bear all the blame.

Recent research, however, suggests at least part of the problem lies not with the student, but with the school’s culture.

Educational research shows that encouraging students to learn from their mistakes through a “growth mindset” can help a student go from believing they can’t succeed in school because they aren’t good enough, to knowing they can achieve their goals by applying themselves through hard work.

“But if your teachers don’t have that mindset,” says Joe Ashby, principal at Monte Vista Elementary in Monterey, “there is no hope that it will work in your students.”

In collaboration with Oakland-based nonprofit Pivot Learning, MPUSD principals, teachers and administrators participated in a series of surveys, focus groups and workshops to improve the “growth culture” throughout the district.

For PK Diffenbaugh, superintendent of MPUSD, growth culture is about “creating the conditions where people bring their best self to the work.” For staff, that means focusing on personal development that helps each person align with the community’s goal of helping students succeed.

“Studies have shown that if you improve adult culture and learning, you improve student outcomes,” says Robert Curtis, vice president of education programs at Pivot Learning, who oversaw the pilot project. “So if the district wants to help its students, it first has to teach its educators and staff how to develop their own growth mindsets.”

While 13 schools and departments in the district participated in surveys that assessed their current growth culture, five sites chose to take it further.

Representatives from three elementary schools, one middle school, and the Human Resources Department met for day-long workshops over the course of a year where they learned activities “that helped people get to a high level of purpose, connection, and vulnerability to communicate within the group,” says Ashby, who participated in the pilot. This included protocols that allowed participants to share their mistakes and express their goals for self-improvement while also providing a space to provide each other with constructive feedback. “These skills apply directly to working with students, so we got to bring them back to our schools right away.”

Though the immediate goal of the pilot was to help MPUSD staff develop their growth culture, the long term goal is to address “teacher morale, teacher retention, and student outcomes,” says Curtis.

“The pilot is very much in line with what I’ve laid out from day one, which is that we are all going to learn,” says Diffenbaugh. “There’s a common misconception that once you become an adult, you’re done learning and growing. That’s not true.”

Since being appointed as superintendent of MPUSD in June 2014, Diffenbaugh has spearheaded a number of changes in the district that have resulted in positive student outcomes. For example, the eligibility of high school students to enter the UC and CSU systems has increased from 35 to 80% in the past five years.

The results of the pilot study show that not only did the five target teams significantly improve their growth culture through the program, there was also a “ripple effect” throughout the district, says Curtis.

Though Diffenbaugh says it may be too soon to see the pilot study’s impact on students, the superintendent is hopeful for the future. “We have a long way to go. But we’ve taken not only the first step, but also the most difficult step of changing our culture. Now all of us are working together toward a common vision.”

With the new school year well underway, Diffenbaugh and his team are paying close attention to see how things have changed for students.

Even though the study has ended, Ashby continues to implement initiatives in his school to promote growth culture for both students and staff. “It was one of the most impactful professional development programs of my whole 25-year career.”

Article originally published by the Monterey Herald on October 7, 2019